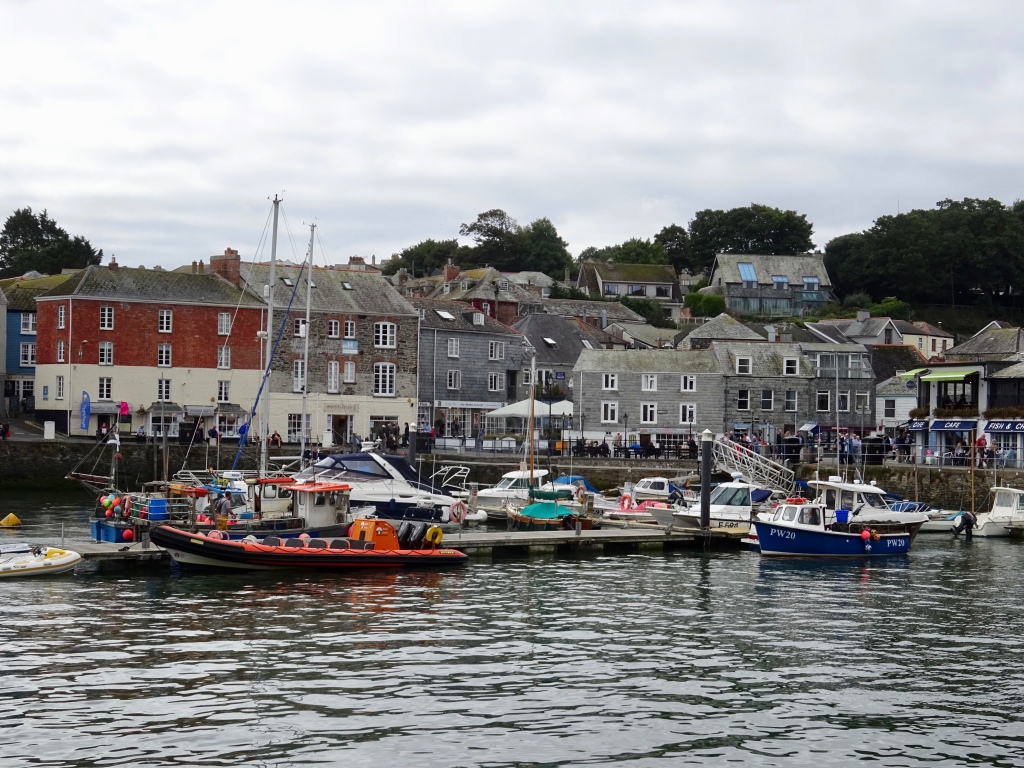 Madam had wanted to visit Padstow for some time, mostly because it is the home of a celebrity chef.  I couldn’t find a single hotel in Padstow with availability that wouldn’t make my credit card squeal with pain, so I booked one in nearby Weybridge for a couple of nights.

After checking in to the hotel, which turned out to be on the edge of town in a dreary industrial estate next to a timber merchants, we were both too tired to travel any further so we ended up having dinner in the attached restaurant, an experience neither of us wishes to repeat.

It was a cloudy but warm day as we drove into Padstow. I had set the SatNav to the postcode of a car park near the town centre.  On the way into town, we passed a park and ride offering all day parking for £5.  I wondered why such a small town would even have a large park and ride as we continued into the town.  The first two town car parks were full.  The third had a narrow space that, after much manoeuvring, we managed to squeeze into. I started to see the wisdom of the park and ride.

Madam told me that the town was often referred to as Padstein due to the presence of the businesses owned by Rick Stein, the aforementioned celebrity chef.  We walked from the car park into the centre and passed a restaurant with his name, then a bakery, then another restaurant.  Even the tourist information office has a book of his recipes.  I checked with the Google later and learned that he owns four restaurants, a cookery school, a patisserie, a hotel and holiday rentals in the town.

The streets were packed with tourists. It was impossible to walk on the crowded pavements, we were forced into the road to make any progress. We had a look around the pretty harbour and I took a few photographs.  A fisherman was unloading lobsters from his boat.  A light breeze blew from the river.   A passenger boat was busy ferrying passengers between Padstow and Rock on the other side of the River Camel.

The streets were well kept and pleasant but I just couldn’t see enough to attract the masses of visitors.  A gift shop had a sign in the window that read ‘Anyone who tells you money can’t buy happiness doesn’t know where to shop.’

I stepped over an extending dog lead stretched across the pavement.

“So who is the Stein chap then,” I asked Madam.

“You’ve seen him on TV,” she replied, “he does the seafood dishes.”

I thought for a while.  “The one from Essex that whizes and wazzes stuff?  I like him.”

“No, that’s Jamie Oliver.  Stein does seafood.  Travels a lot.”

Madam sighed, shook her head and pulled me away from a Spaniel about to use my leg as a lamp post.

Madam sighed.  “No, that was Delia Smith.  Stein is a really popular chef.  He has a seafood restaurant here.  Expensive but very good. We should go and look at the menu. It might be a good place for lunch.”

“Expensive you say?” I asked in a small but controlled squeak.

We watched the ferry disgorge more passengers while I thought about our lunch plans.  A small fishing boat chugged into the harbour.

“Those £3 pasties in the bakery looked really nice.” I said.

I’ve never seen so many dogs in one town.  They were everywhere.  Most of them looked stressed and unhappy in the crowds. They were urinating on every available lamp post.  Many people had two or three dogs. We passed two specialist dog accessory shops.  Even the gift shops were selling dog bandanas.

A Yorkshire Terrier was leaving a steaming deposit in front of one of Stein’s cafes.  We popped into a gift shop nearby as Madam needs more Christmas ornaments, apparently.  They didn’t have any but we asked the owner why there were so many dogs.

He hesitated a while then said “I like dogs, I really do…. but it’s just out of hand.  Some of the shops started putting up dogs welcome signs.  Then they all did it. Word got out and everybody started bringing their dogs here.”

He rearranged a rack of t-shirts and said “I’m fed up with dodging piles of crap on the pavements.  One of my friends even calls this place Dogstein.”

He looked at Madam and said “Would you like a tea towel with a Labrador picture or do you prefer the Scottie?”

We had enough of tripping over dog leads and jumping puddles ourselves and couldn’t see anything in the town to further detain us, so we headed towards Newquay.  I was upset at leaving as we still had 45 minutes on our parking.

We stopped off at Mawgan Porth on the way.  It was a small sandy cove with a surf shop and a couple of cafes and, more importantly, free parking.

Surfers were fighting the waves to get further out to sea.  An RNLI boat was on the beach, close to the water.  The wind was picking up and fine sand was blowing in the air. A few people were walking dogs on the beach.  The dogs looked happy, running in all directions, tails wagging furiously. 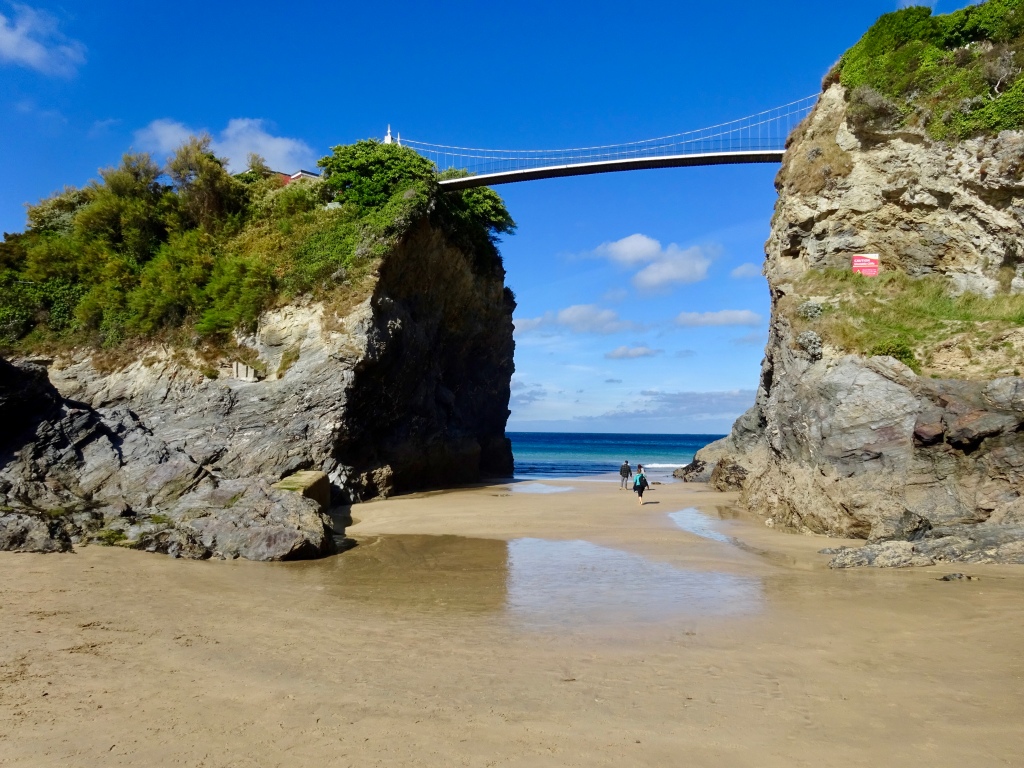 And so on to Newquay.  As we passed through the outskirts, signs were advertising cheap wetsuits and slick boards, whatever they are.  We drove in along a high cliff road lined with hotels and parked close to the town centre.  A man was sitting on a sleeping bag by the car park entrance rolling a cigarette and enjoying a morning aperitif.   We walked past pound shops, charity shops, betting shops and an off licence.  Several shops were closed with faded ‘To Let’ or ‘For Sale’ signs.

The attractive and photogenic sandy beach was small and focused on surfing.  Two RNLI trucks stood by on the beach.  Two men in wetsuits were standing at the waters edge holding boards and looking forlornly at the lack of any surf.  There were two surfing shops overlooking the beach, one if them looked as if it had closed down.  A bakery cafe and a fish and chip shop stood alongside them.

Six people were lying on boards on the sand, their instructor standing over them. Their lesson must have been ‘how to fall asleep on a board’ as none of them moved while we were there.

“You can go for a swim if you like” I replied.

She looked out at the fast receding tide and said “Lets get something to eat.”

I bought my first Cornish pasty of the trip and sat eating it on a wall opposite ‘Rip Curl Surf Threads’.  Next door, the library had signs outside in both English and Cornish.  A total of 400 people claim to be fluent in Cornish, while another few thousand can speak a little.  It isn’t recorded how many of them live in Newquay but I’m guessing they could hold a party in a phone box and still have room for the buffet table.

We added Newquay to the list of places we never needed to visit again.

We were back in the hotel by mid afternoon and I needed something cold to drink.  The vending machine in the lobby of the hotel was empty so I asked the receptionist if there was another machine.  She shrugged and said no, implying it wasn’t her problem and why was I bothering her.

I walked into Weybridge along a busy main road in the hope of finding a convenience store or supermarket.  It was longer than it looked on the map, about a mile or so. I walked down a long busy main road, over a 15th century stone bridge above a shallow river, and into the town centre.

I was halfway up the pedestrianised main street when I realised there was something different about the town. There was a complete absence of chain stores. No WH Smith, no Boots with their glaring plastic and glass shopfronts. No Starbucks, no Next or New Look.  There were independent butchers, stationers, clothes shops, even a locally owned bookshop.

This site uses Akismet to reduce spam. Learn how your comment data is processed.